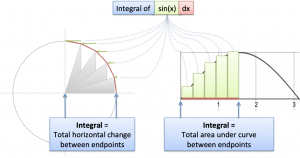 You're minding your own business when some punk asks what the integral of $\sin(x)$ means. Your options:

Option 1 is tempting, but let's take a look at the others.

Why "Area Under the Curve" is Unsatisfying

Describing an integral as "area under the curve" is like describing a book as a list of words. Technically correct, but misses the message and I suspect you haven't done the assigned reading.

Unless you're trapped in LegoLand, integrals mean something besides rectangles.

My calculus conundrum was not having an intuition for all the mechanics.

We can call on a few insights:

Ok. With those 3 intuitions, our rough (rough!) conversion to Plain English is:

We intend to travel a simple path from 0 to x, but we end up with a smaller percentage instead. (Why? Because $\sin(x)$ is usually less than 100%). So we'd expect something like 0.75x.

But the real $\sin(x)$, that squirrelly rogue, changes as we go. Let's see what fraction of our path we really get.

Visualize The Change in Sin(x) 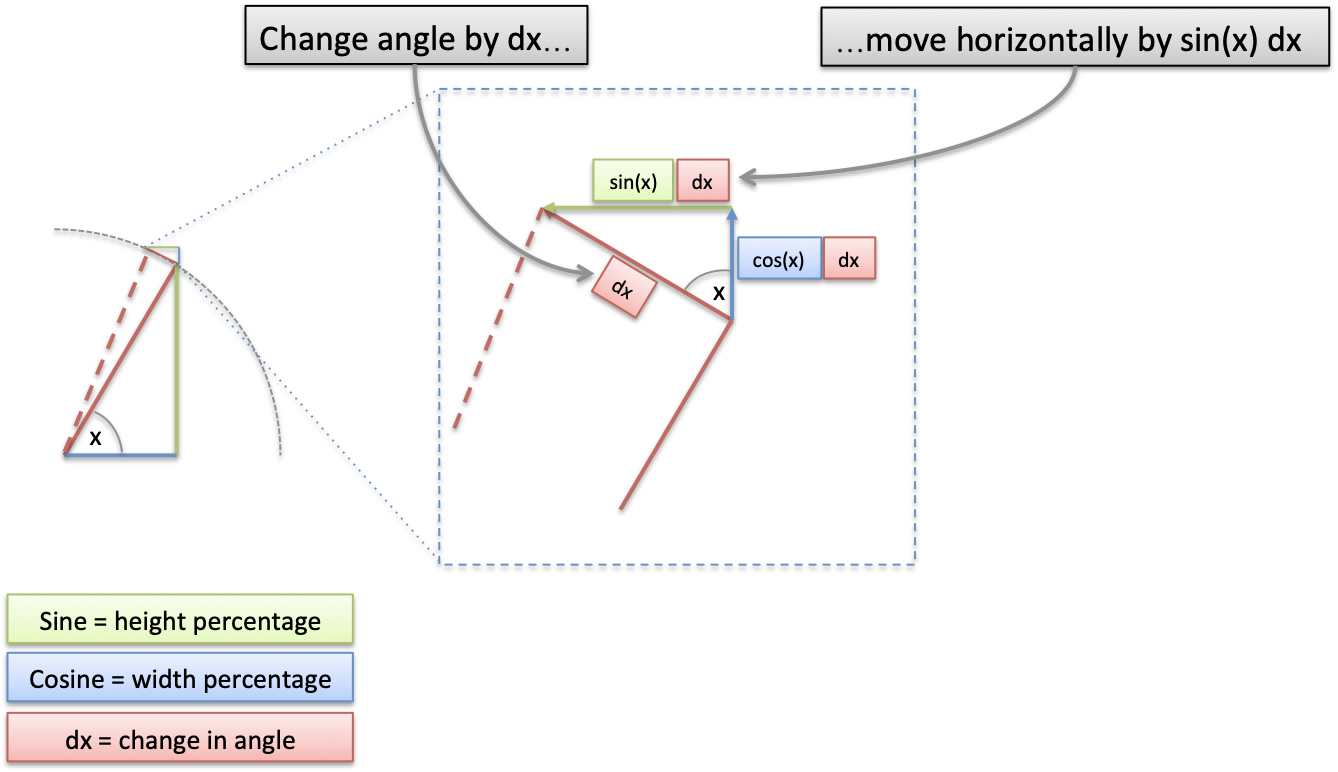 With me? With trigonometry, we can find the exact change in height/width as we slide along the circle by $dx$.

By similar triangles, our change just just our original triangle, rotated and scaled.

Now, remember that sine and cosine are functions that return percentages. (A number like 0.75 doesn't have its orientation. It shows up and makes things 75% of their size in whatever direction they're facing.)

So, given how we've drawn our Triangle of Change, $\sin(x) dx$ is our horizontal change. Our plain-English intuition is:

Ok. Let's graph this bad boy to see what's happening. With our "$\sin(x) dx$ = tiny horizontal change" insight we have: 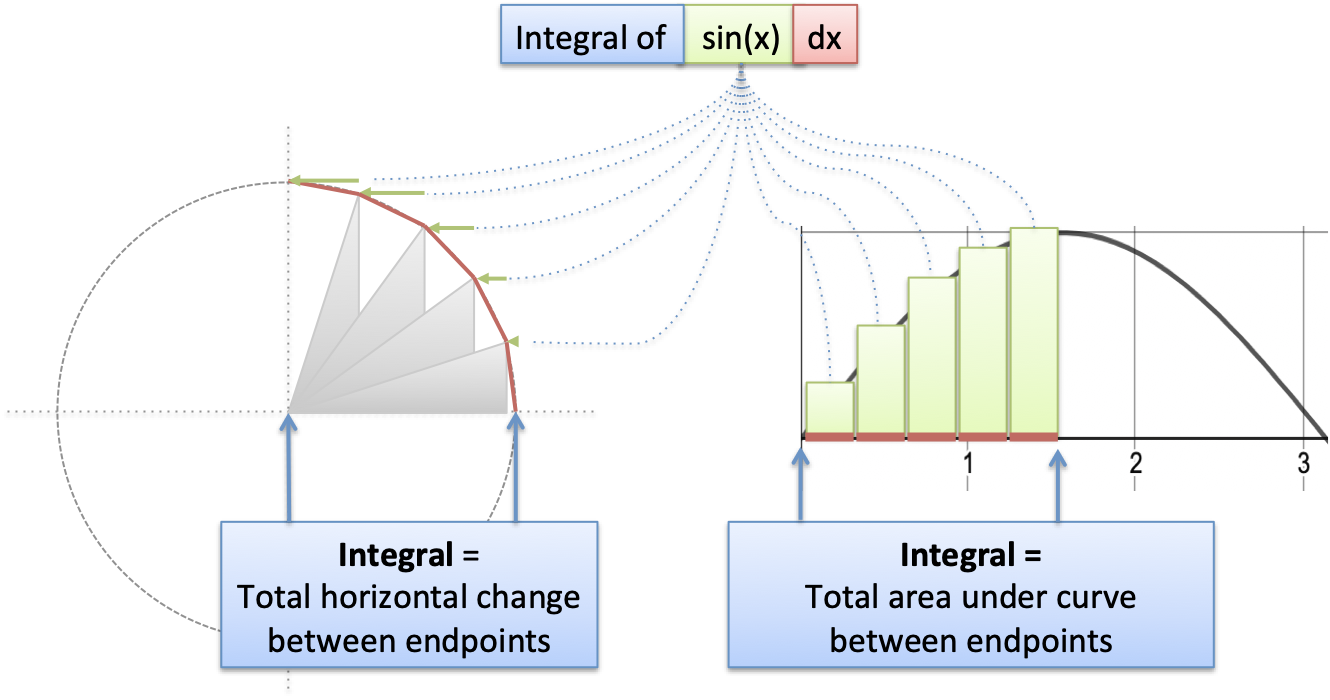 As we circle around, we have a bunch of $dx$ line segments (in red). When sine is small (around x=0) we barely get any horizontal motion. As sine gets larger (top of circle), we are moving up to 100% horizontally.

Ultimately, the various $\sin(x) dx$ segments move us horizontally from one side of the circle to the other.

Aha! That's the meaning. Let's eyeball it. When moving from $x=0$ to $x=\pi$ we move exactly 2 units horizontally. It makes complete sense in the diagram.

Using the Official Calculus Fact that $\int \sin(x) dx = -\cos(x)$ we would calculate:

Yowza. See how awkward it is, those double negations? Why was the visual intuition so much simpler?

Our path along the circle ($x=0$ to $x=\pi$) moves from right-to-left. But the x-axis goes positive from left-to-right. When convert distance along our path into Standard Area™, we have to flip our axes: 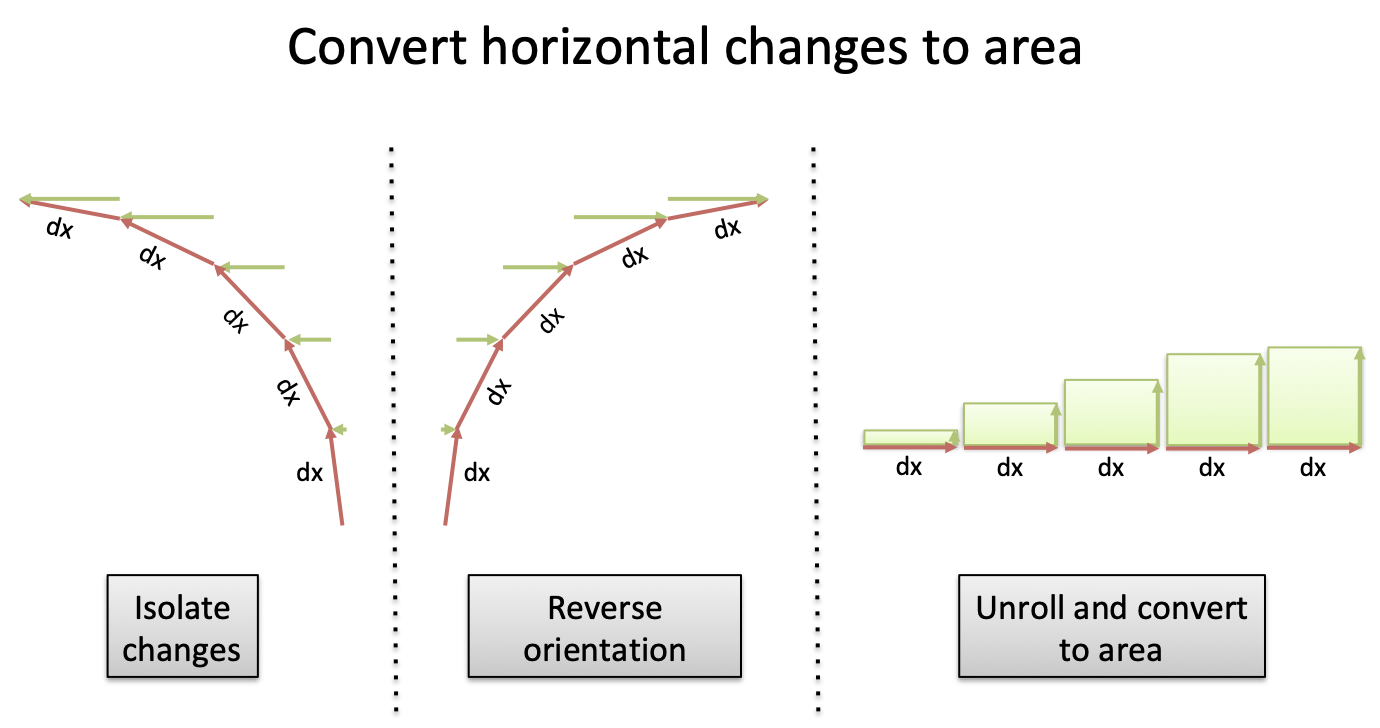 Our excitement to put things in the official format stamped out the intuition of what was happening.

We don't really talk about the Fundamental Theorem of Calculus anymore. (Is it something I did?)

Instead of adding up all the tiny segments, just do: end point - start point.

That's the power of the Fundamental Theorem of Calculus. Skip the intermediate steps and just subtract endpoints.

Why did I write this? Because I couldn't instantly figure out:

This isn't an exotic function with strange parameters. It's like asking someone to figure out $2^3$ without a calculator. If you claim to understand exponents, it should be possible, right?

Now, we can't always visualize things. But for the most common functions we owe ourselves a visual intuition. I certainly can't eyeball the 2 units of area from 0 to $\pi$ under a sine curve.

So on average, 63.66% of your path's length is converted to horizontal motion.

It seems weird that height controls the width, and vice-versa, right?

If height controlled height, we'd have runaway exponential growth. But a circle needs to regulate itself.

$e^x$ is the kid who eats candy, grows bigger, and can therefore eat more candy.

$\sin(x) $ is the kid who eats candy, gets sick, waits for an appetite, and eats more candy.

The "area" in our integral isn't literal area, it's a percentage of our length. We visualized the multiplication as a 2d rectangle in our generic integral, but it can be confusing. If you earn money and are taxed, do you visualize 2d area (income * (1 - tax))? Or just a quantity helplessly shrinking?