e has always bothered me — not the letter, but the mathematical constant. What does it really mean?

The mathematical constant e is the base of the natural logarithm.

And when you look up the natural logarithm you get:

The natural logarithm, formerly known as the hyperbolic logarithm, is the logarithm to the base e, where e is an irrational constant approximately equal to 2.718281828459.

Nice circular reference there. It’s like a dictionary that defines labyrinthine with Byzantine: it’s correct but not helpful. What’s wrong with everyday words like “complicated”?

I’m not picking on Wikipedia — many math explanations are dry and formal in their quest for rigor. But this doesn’t help beginners trying to get a handle on a subject (and we were all a beginner at one point).

No more! Today I’m sharing my intuitive, high-level insights about what e is and why it rocks. Save your rigorous math book for another time. Here’s a quick video overview of the insights:

e is NOT Just a Number

Describing e as “a constant approximately 2.71828…” is like calling pi “an irrational number, approximately equal to 3.1415…”. Sure, it’s true, but you completely missed the point.

Pi is the ratio between circumference and diameter shared by all circles. It is a fundamental ratio inherent in all circles and therefore impacts any calculation of circumference, area, volume, and surface area for circles, spheres, cylinders, and so on. Pi is important and shows all circles are related, not to mention the trigonometric functions derived from circles (sin, cos, tan).

e is the base rate of growth shared by all continually growing processes. e lets you take a simple growth rate (where all change happens at the end of the year) and find the impact of compound, continuous growth, where every nanosecond (or faster) you are growing just a little bit.

e shows up whenever systems grow exponentially and continuously: population, radioactive decay, interest calculations, and more. Even jagged systems that don’t grow smoothly can be approximated by e.

So e is not an obscure, seemingly random number. e represents the idea that all continually growing systems are scaled versions of a common rate.

Let's start by looking at a basic system that doubles after an amount of time. For example, 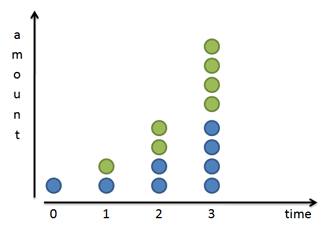 Splitting in two or doubling is a very common progression. Sure, we can triple or quadruple, but doubling is convenient, so hang with me here.

Said another way, doubling is 100% growth. We can rewrite our formula like this:

Our formula assumes growth happens in discrete steps. Our bacteria are waiting, waiting, and then boom, they double at the very last minute. Our interest earnings magically appear at the 1 year mark. Based on the formula above, growth is punctuated and happens instantly. The green dots suddenly appear.

The world isn’t always like this. If we zoom in, we see that our bacterial friends split over time: 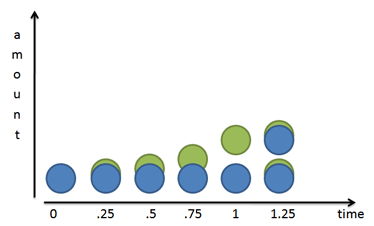 Mr. Green doesn’t just show up: he slowly grows out of Mr. Blue. After 1 unit of time (24 hours in our case), Mr. Green is complete. He then becomes a mature blue cell and can create new green cells of his own.

Does this information change our equation?

Nope. In the bacteria case, the half-formed green cells still can’t do anything until they are fully grown and separated from their blue parents. The equation still holds.

But money is different. As soon as we earn a penny of interest, that penny can start earning micro-pennies of its own. We don’t need to wait until we earn a complete dollar in interest — fresh money doesn’t need to mature.

Based on our old formula, interest growth looks like this: 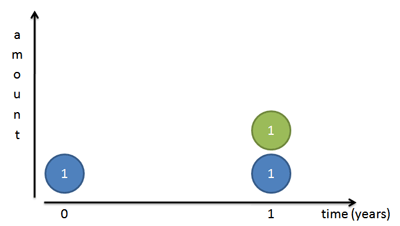 But again, this isn’t quite right: all the interest appears on the last day. Let’s zoom in and split the year into two chunks. We earn 100% interest every year, or 50% every 6 months. So, we earn 50 cents the first 6 months and another 50 cents in the last half of the year: 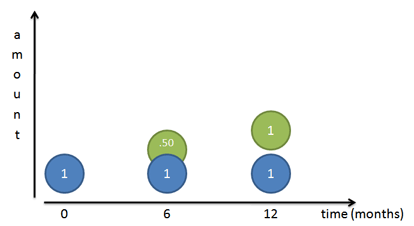 But this still isn’t right! Sure, our original dollar (Mr. Blue) earns a dollar over the course of a year. But after 6 months we had a 50-cent piece, ready to go, that we neglected! That 50 cents could have earned money on its own: 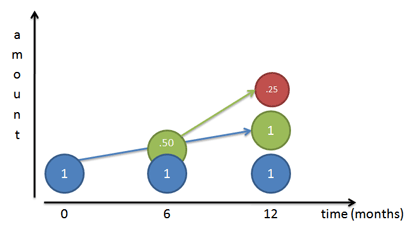 Let’s turn our return into a formula. The growth of two half-periods of 50% is:

It’s time to step it up a notch. Instead of splitting growth into two periods of 50% increase, let’s split it into 3 segments of 33% growth. Who says we have to wait for 6 months before we start getting interest? Let’s get more granular in our counting.

Charting our growth for 3 compounded periods gives a funny picture: 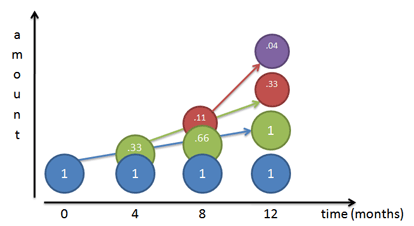 Think of each color as shoveling money upwards towards the other colors (its children), at 33% per period:

Take some time to really understand what’s happening with this growth:

Make sense? It’s tough at first — I even confused myself a bit while putting the charts together. But see that each dollar creates little helpers, who in turn create helpers, and so on.

We get a formula by using 3 periods in our growth equation:

Can We Get Infinite Money?

Why not take even shorter time periods? How about every month, day, hour, or even nanosecond? Will our returns skyrocket?

Our return gets better, but only to a point. Try using different numbers of n in our magic formula to see our total return:

The numbers get bigger and converge around 2.718. Hey… wait a minute… that looks like e!

Yowza. In geeky math terms, e is defined to be that rate of growth if we continually compound 100% return on smaller and smaller time periods:

This limit appears to converge, and there are proofs to that effect. But as you can see, as we take finer time periods the total return stays around 2.718.

But what does it all mean?

The number e (2.718…) is the maximum possible result when compounding 100% growth for one time period. Sure, you started out expecting to grow from 1 to 2 (that’s a 100% increase, right?). But with each tiny step forward you create a little dividend that starts growing on its own. When all is said and done, you end up with e (2.718…) at the end of 1 time period, not 2. e is the maximum, what happens when we compound 100% as much as possible.

e is like a speed limit (like c, the speed of light) saying how fast you can possibly grow using a continuous process. You might not always reach the speed limit, but it’s a reference point: you can write every rate of growth in terms of this universal constant.

(Aside: Be careful about separating the increase from the final result. 1 becoming e (2.718…) is an increase (growth rate) of 171.8%. e, by itself, is the final result you observe after all growth is taken into account (original + increase)).

What about different rates?

Let’s see. The rate of 50% compound growth would look like this:

Hrm. What can we do here? Remember, 50% is the total return, and n is the number of periods to split the growth into for compounding. If we pick n=50, we can split our growth into 50 chunks of 1% interest:

Sure, it’s not infinity, but it’s pretty granular. Now imagine we also divided our regular rate of 100% into chunks of 1%: 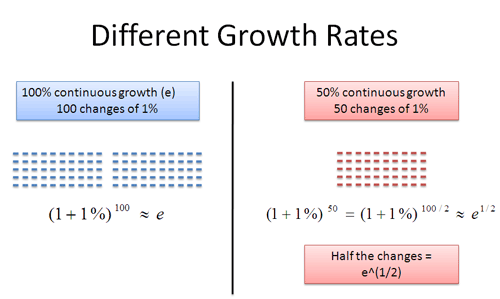 What is the difference between the two numbers? Well, it’s just half the number of changes:

What about different times?

Because of the magic of exponents, we can avoid having two powers and just multiply rate and time together in a single exponent.

This is wild! $e^x$ can mean two things:

Won’t this overlap confuse things? Will our formulas break and the world come to an end?

It all works out. When we write $e^x$, the variable $x $is a combination of rate and time.

Let me explain. When dealing with continuous compound growth, 10 years of 3% growth has the same overall impact as 1 year of 30% growth (and no growth afterward).

But in both cases, the growth is $e^{.30} = 1.35$ in the end. We’re impatient and prefer large, fast growth to slow, long growth but e shows they have the same net effect.

So, our general formula becomes:

If we have a return of r for t time periods, our net compound growth is $e^{rt}$. This even works for negative and fractional returns, by the way.

Examples make everything more fun. A quick note: We’re so used to formulas like $2^x$ and regular, compound interest that it’s easy to get confused (myself included). Read more about simple, compound and continuous growth.

These examples focus on smooth, continuous growth, not the jumpy growth that happens at yearly intervals. There are ways to convert between them, but we’ll save that for another article.

Suppose I have 300kg of magic crystals. They’re magic because they grow throughout the day: I watch a single crystal, and in the course of 24 hours it sheds off its own weight in crystals. (The baby crystals start growing immediately at the same rate, but I can’t track that — I’m watching how much the original sheds). How much will I have after 10 days?

This can be tricky: notice the difference between the input rate and the total output rate. The “input” rate is how much a single crystal changes: 100% in 24 hours. The net output rate is e (2.718x) because the baby crystals grow on their own.

In this case we have the input rate (how fast one crystal grows) and want the total result after compounding (how fast the entire group grows because of the baby crystals). If we have the total growth rate and want the rate of a single crystal, we work backwards and use the natural log.

Suppose I have \$120 in an account with 5% interest. My bank is generous and gives me the maximum possible compounding. How much will I have after 10 years?

Our rate is 5%, and we’re lucky enough to compound continuously. After 10 years, we get $120 \cdot e^{.05 \cdot 10} = 197.85$. Of course, most banks aren’t nice enough to give you the best possible rate. The difference between your actual return and the continuous one is how much they don’t like you.

I have 10kg of a radioactive material, which appears to continuously decay at a rate of 100% per year. How much will I have after 3 years?

Decaying continuously at 100% per year is the trajectory we start off with. Yes, we do begin with 10kg and expect to “lose it all” by the end of the year, since we’re decaying at 10 kg/year.

We go a few months and get to 5kg. Half a year left? Nope! Now we’re losing at a rate of 5kg/year, so we have another full year from this moment!

As time goes on, we lose material, but our rate of decay slows down. This constantly changing growth is the essence of continuous growth & decay.

If you want fancier examples, try the Black-Scholes option formula (notice e used for exponential decay in value) or radioactive decay. The goal is to see $e^{rt}$ in a formula and understand why it’s there: it’s modeling a type of growth or decay.

And now you know why it’s “e”, and not pi or some other number: e raised to “r*t” gives you the growth impact of rate r and time t.

My goal was to:

This article is just the start — cramming everything into a single page would tire you and me both. Dust yourself off, take a break and learn about e’s evil twin, the natural logarithm.