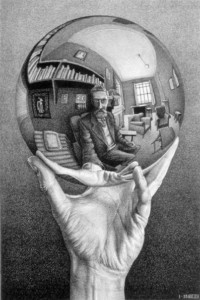 Imagine you're a photographer. You come across a beautiful, reflective object: a metal sphere, a calm lake, a mirrored room. Seems like a good photo op, right? 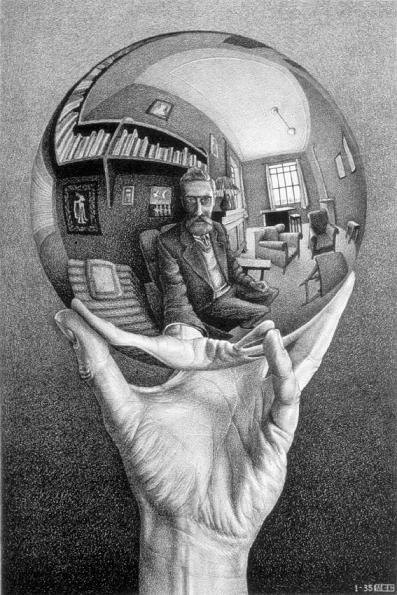 The dilemma: You need a camera for the photo, but don't want the camera in the photo. The instrument shouldn't appear inside the subject. (Hubert, you're leaving scalpels in the patient again.)

So, we need an isolated photo of a shiny object. What can we do?

In Calculus, a function like $f(x) = x^2$ is our subject. Limits (shrinking) and infinitesimals (invisibility) are how we take photos without our reflection getting in the way.

Taking a Photo of a Function

Ok. Now take a function like $f(x) = x^2$. Again, let's put the camera into the scene to observe changes:

From a technical perspective, the last step happens by shrinking the camera to zero (limits) or letting the camera be invisible (infinitesimals).

Neat, eh? We're reframing the process of finding the derivative: make a change, see what the direct effects are, remove the artifacts. The concept of "what the camera directly sees" and the camera's "reflection" help settle my mind about throwing away terms that appear to be there.

Linear functions are dull because they only have terms like $x$ or constant values -- the camera can attach directly, and there's no reflection. Non-linear functions have self-interactions (like $x^2$) which means the camera has a chance to see itself. Reflections need to be removed.

With multiple subjects [$f(x)$, $g(x)$] or multiple cameras (for the x, y and z axis) we get cross terms like $df \cdot dg$ or $dx \cdot dy$. The goal is the same: remove unnecessary self- and cross-reflections from the final result. Show what the camera directly sees.

The role of dx

This difference (for example, $2x \cdot dx + dx^2$) isolates the changes that $dx$ is directly responsible for ("sees"). We can then divide by $dx$ to get the change as a rate (how much we got out for how much we put in).

The concern is the same: the change $dx$ may have reflections ($dx^2$) that need to be removed.

The Hawthorne Effect is where people behave differently when being studied. The study itself is appearing in the results.

If you ask people to enter a study about their eating, exercise, reading, or sleeping habits, those behaviors will change. (Gotta look good for the camera! Where are those Greek philosophers I'd always meant to read?)

Math gives us a few suggestions:

Think math only applies to equations? Hah. Only if we don't internalize the underlying concept.