An Intuitive Guide to Linear Algebra

Despite two linear algebra classes, my knowledge consisted of “Matrices, determinants, eigen something something”.

The survivors are physicists, graphics programmers and other masochists. We missed the key insight:

Linear algebra gives you mini-spreadsheets for your math equations.

We can take a table of data (a matrix) and create updated tables from the original. It’s the power of a spreadsheet written as an equation.

Here’s the linear algebra introduction I wish I had, with a real-world stock market example.

What’s in a name?

Straight lines are predictable. Imagine a rooftop: move forward 3 horizontal feet (relative to the ground) and you might rise 1 foot in elevation (The slope! Rise/run = 1/3). Move forward 6 feet, and you’d expect a rise of 2 feet. Contrast this with climbing a dome: each horizontal foot forward raises you a different amount.

Lines are nice and predictable:

In math terms, an operation F is linear if scaling inputs scales the output, and adding inputs adds the outputs:

In our example, $F(x)$ calculates the rise when moving forward x feet, and the properties hold:

An operation is a calculation based on some inputs. Which operations are linear and predictable? Multiplication, it seems.

So, what types of functions are actually linear? Plain-old scaling by a constant, or functions that look like: $F(x) = ax$. In our roof example, $a = 1/3$.

$G$ is still linear, since doubling the input continues to double the output:

We have “mini arithmetic”: multiply inputs by a constant, and add the results. It’s actually useful because we can split inputs apart, analyze them individually, and combine the results:

If we allowed non-linear operations (like $x^2$) we couldn’t split our work and combine the results, since $(a+b)^2 \neq a^2 + b^2$. Limiting ourselves to linear operations has its advantages.

Most courses hit you in the face with the details of a matrix. “Ok kids, let’s learn to speak. Select a subject, verb and object. Next, conjugate the verb. Then, add the prepositions…”

No! Grammar is not the focus. What’s the key idea?

Ok. First, how should we track a bunch of inputs? How about a list:

Next, how should we track our operations? Remember, we only have “mini arithmetic”: multiplications by a constant, with a final addition. If our operation $F$ behaves like this:

Only need the first input?

But it won’t work: F expects 3 inputs, not 6. We should separate the inputs into groups:

And how could we run the same input through several operations? Have a row for each operation: 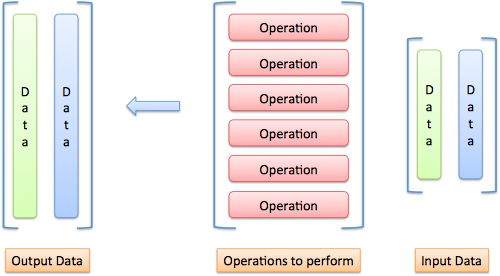 Imagine “pouring” each input through each operation: 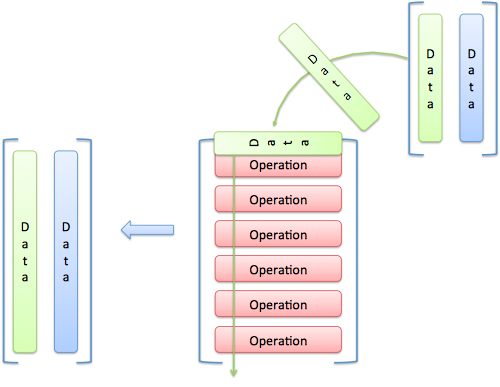 Time for the red pill. A matrix is a shorthand for our diagrams:

A matrix is a single variable representing a spreadsheet of inputs or operations.

Instead of an input => matrix => output flow, we use function notation, like y = f(x) or f(x) = y. We usually write a matrix with a capital letter (F), and a single input column with lowercase (x). Because we have several inputs (A) and outputs (B), they’re considered matrices too:

Matrix size is measured as RxC: row count, then column count, and abbreviated “m x n” (I hear ya, “r x c” would be easier to remember). Items in the matrix are referenced the same way: aij is the ith row and jth column (I hear ya, “i” and “j” are easily confused on a chalkboard). Mnemonics are ok with context, and here’s what I use:

Why does RC ordering make sense? Our operations matrix is 2×3 and our input matrix is 3×2. Writing them together:

Notice the matrices touch at the “size of operation” and “size of input” (n = p). They should match! If our inputs have 3 components, our operations should expect 3 items. In fact, we can only multiply matrices when n = p.

The output matrix has m operation rows for each input, and q inputs, giving a “m x q” matrix.

Let’s get comfortable with operations. Assuming 3 inputs, we can whip up a few 1-operation matrices:

And if we merge them into a single matrix:

Whoa — it’s the “identity matrix”, which copies 3 inputs to 3 outputs, unchanged. How about this guy?

He’s an input doubler. We could rewrite him to 2*I (the identity matrix) if we were so inclined.

And yes, when we decide to treat inputs as vector coordinates, the operations matrix will transform our vectors. Here’s a few examples:

These are geometric interpretations of multiplication, and how to warp a vector space. Just remember that vectors are examples of data to modify.

And a bonus output: let’s make a new portfolio listing the net profit/loss from the event.

Normally, we’d track this in a spreadsheet. Let’s learn to think with linear algebra:

Visualize the problem. Imagine running through each operation: 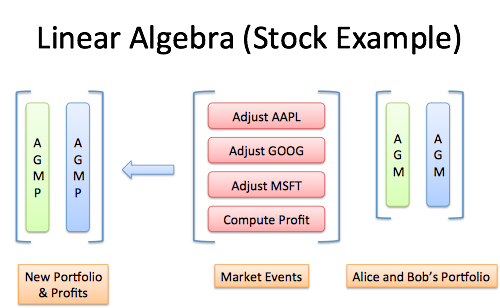 The key is understanding why we’re setting up the matrix like this, not blindly crunching numbers.

Got it? Let’s introduce the scenario.

Suppose a secret iDevice is launched: Apple jumps 20%, Google drops 5%, and Microsoft stays the same. We want to adjust each stock value, using something similar to the identity matrix:

The new Apple value is the original, increased by 20% (Google = 5% decrease, Microsoft = no change).

Making sense? Three inputs enter, four outputs leave. The first three operations are a “modified copy” and the last brings the changes together. 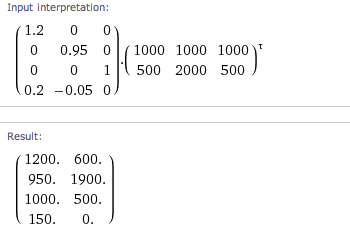 (Note: Inputs should be in columns, but it’s easier to type rows. The Transpose operation, indicated by t (tau), converts rows to columns.)

An early use of tables of numbers (not yet a “matrix”) was bookkeeping for linear systems:

We can avoid hand cramps by adding/subtracting rows in the matrix and output, vs. rewriting the full equations. As the matrix evolves into the identity matrix, the values of x, y and z are revealed on the output side.

This process, called Gauss-Jordan elimination, saves time. However, linear algebra is mainly about matrix transformations, not solving large sets of equations (it’d be like using Excel for your shopping list).

Words have technical categories to describe their use (nouns, verbs, adjectives). Matrices can be similarly subdivided.

Descriptions like “upper-triangular”, “symmetric”, “diagonal” are the shape of the matrix, and influence their transformations.

The eigenvector and eigenvalue represent the “axes” of the transformation.

Consider spinning a globe: every location faces a new direction, except the poles.

(My intuition here is weak, and I’d like to explore more. Here’s a nice diagram and video.)

A funky thought: we can treat the operations matrix as inputs!

Think of a recipe as a list of commands (Add 2 cups of sugar, 3 cups of flour…).

What if we want the metric version? Take the instructions, treat them like text, and convert the units. The recipe is “input” to modify. When we’re done, we can follow the instructions again.

means “Create matrix X, which first adjusts for news, and then adjusts for taxes”. Whoa! We didn’t need an input portfolio, we applied one matrix directly to the other.

The beauty of linear algebra is representing an entire spreadsheet calculation with a single letter. Want to apply the same transformation a few times? Use N2 or N3.

Can We Use Regular Addition, Please?

Yes, because you asked nicely. Our “mini arithmetic” seems limiting: multiplications, but no addition? Time to expand our brains.

Now our operations matrix has an extra, known value to play with! If we want x + 1 we can write:

Want the geeky explanation? We’re pretending our input exists in a 1-higher dimension, and put a “1” in that dimension. We skew that higher dimension, which looks like a slide in the current one. For example: take input (x, y, z, 1) and run it through:

Mini-arithmetic isn’t so limited after all.

I’ve overlooked some linear algebra subtleties, and I’m not too concerned. Why?

These metaphors are helping me think with matrices, more than the classes I “aced”. I can finally respond to “Why is linear algebra useful?” with “Why are spreadsheets useful?”

They’re not, unless you want a tool used to attack nearly every real-world problem. Ask a businessman if they’d rather donate a kidney or be banned from Excel forever. That’s the impact of linear algebra we’ve overlooked: efficient notation to bring spreadsheets into our math equations.