Once you understand flux intuitively, you don’t need to memorize equations. The formulas become “obvious” dare I say. However, it took a lot of effort to truly understand that:

Your vector calculus math life will be so much better once you understand flux. And who doesn’t want that?

Think of flux as the amount of something crossing a surface. This “something” can be water, wind, electric field, bananas, pretty much anything you can imagine. Math books will use abstract concepts like electric fields, which is pretty hard to visualize. I find bananas more memorable, so we’ll be using those.

To measure the flux (i.e. bananas) passing through a surface, we need to know

Keep a few ideas in mind when considering flux:

The source of flux has a huge impact on the total flux. Doubling the source (doubling the “banana-ness” of each banana), will double the flux passing through a surface.

Total flux also depends on the orientation of the field and the surface. When our surface completely faces the field it captures maximum flux, like a sail facing directly into the wind. As the surface tilts away from the field, the flux decreases as less and less flux crosses the surface.

Eventually, we get zero flux when the source and boundary are parallel — the flux is passing over the boundary, but not crossing through it. It would be like holding a bucket sideways under a waterfall. You wouldn’t capture much water (ignoring splashing) and may get a few funny looks.

Total flux also depends on the size of our surface. In the same field, a bigger bucket will capture more flux than a smaller one. When we figure out our total flux, we need to see how much field is passing through our entire surface.

This is simple stuff so far, right? If you forget, just think about capturing water from a waterfall. What matters? The strength of the waterfall, the size of the bucket and the orientation of the bucket.

Think of flux as a hose spraying water. Positive flux means flux is leaving the hose; the hose is a source of flux. Negative flux is like water entering a sink; it is a sink of flux. So positive flux = leaving, negative = entering. Got it? (By the way, the terms “source” and “sink” are sometimes used to describe fields).

A fire hose shooting at a tiny bucket (small surface, large magnitude) could have the same flux as a garden hose aimed at a large bucket (large surface, small magnitude). And in case you forgot, flux reminds us to hold the bucket so it is facing the source. This should be obvious – but don’t you want ideas (especially in math!) to be obvious?

Now that we have a physical intuition, let’s try to derive the math. In most cases, the source of flux will be described as a vector field: Given a point (x,y,z), there's a formula giving the flux vector at that point.

We want to know how much of that vector field is acting/passing through our surface, taking the magnitude, orientation, and size into account. From our intuition, it should look something like this:

However, this formula only works if the vector field is the same at every point. Usually, it’s not, so we’ll take the standard calculus approach to solving problems:

Let’s go out on a limb and call the tiny piece of the surface dS. Total flux is:

Make sense so far? Now, we need to figure out how much orientation actually matters. Like we said before, if the field and the surface are parallel, then there is zero flux. If they are perpendicular, there is full flux. 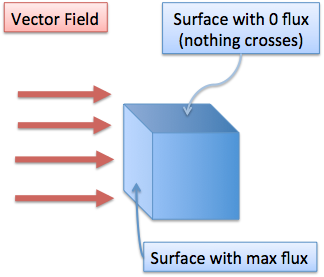 (In this diagram, the flux is parallel with the top surface, and nothing enters from that direction. Mathematically, we represent surfaces by their normal vector, which sticks out of the surface. Don’t let this bookkeeping detail disrupt your visualization.)

If there is an angle, then it is some factor in-between: 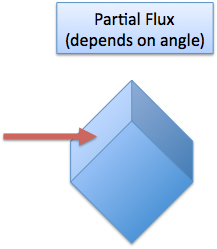 And finally, we convert to the stuffy equation you’ll see in your textbook, where F is our field, S is a unit of area and n is the normal vector of the surface:

Time for one last detail — how do we find the normal vector for our surface?

More complicated shapes may have a normal vector that varies quite a bit. In this case, try to break the shape into smaller regions (like spheres, cylinders and planes) and find the flux in each part. Then, add up the flux in each region to get the total flux (keeping in mind positive and negative flux).

If the shape is more complicated than that, you may need a computer model or more advanced theorems; but at least you know what is happening behind the scenes.

Let’s do a few thought experiments to understand flux. Imagine a tube, that lets water pass right through it. We hold the tube under a waterfall, wait a few seconds, then ask what the flux is. I want a numeric answer – what is the flux?

You might think we need to know the speed of the waterfall, the size of the tube, the orientation, etc. But that isn’t the case.

Remember our convention for flux orientation: positive means flux is leaving, negative means flux is entering. In this example, water is falling downward, or entering the tube. This means the top surface has negative flux (it appears to be siphoning up water).

However, what’s happening at the bottom of the box? The water passed through the top and is now leaving the bottom, which is positive flux: 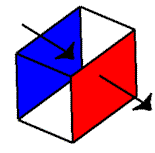 Ah, this beautiful diagram shows what is going on. The top of the box / tube says that water is entering, and the bottom says water is leaving. Assuming the same amount of water is leaving and entering (the rate of water falling is a constant), the net flux would be zero. Think of it as X + (-X) = 0.

What if we had increased the rate of water? Decreased? What would happen?

My (possibly incorrect) answer: If we increased the rate, it means more water would enter than leaves, for a brief moment. We’d have a momentary spike in negative flux (the tube would look like a sink), until the rates equalized. Vice versa if we decreased the rate of water – we’d have a brief spike of positive flux (more water was leaving than entering), until the rate equalized.

Even though net flux is zero, this is different from having zero flux pass through each surface. If you are in an empty field, no shape will generate any flux. But if you are in a field where flux is canceling, changing your shape or orientation could create a non-zero flux. Recognize the difference between having zero flux because the field is zero, vs. having all the flux cancel.

One more point – the “tube” we are considering is a region we define, not a physical tube. Measuring flux is about drawing imaginary boundaries, not having a physical shape. So, when we define the region of a “bucket”, it would not “fill up” with flux. Flux is what is passing through the sides of a bucket at a moment in time. Clearly, if we put in a physical bucket it would fill up, but that’s not what we’re measuring. We’re seeing how much flux would be entering a region we define, from any and all sides (not just the opening). Got it?

Flux is relatively simple to understand, and is really helpful in vector calculus and physics. Trying to understand flux by looking at a mess of integrals is not the way to go. First get an intuitive understanding, and the details will make more sense.

Here’s a few insights that hit me after learning about flux:

Flux is important for math, electricity and magnetism, and your science life will be better for knowing it. Your social life – not so much.

This was a long article. Take a break. Take a shower. Get outside. See your family. Or, read on about divergence. It’s your call.