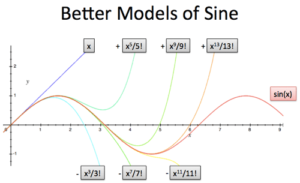 Sine waves confused me. Yes, I can mumble "SOH CAH TOA" and draw lines within triangles. But what does it mean?

I was stuck thinking sine had to be extracted from other shapes. A quick analogy:

You: Geometry is about shapes, lines, and so on.

Alien: Oh? Can you show me a line?

You (looking around): Uh... see that brick, there? A line is one edge of that brick.

Alien: So lines are part of a shape?

You: Sort of. Yes, most shapes have lines in them. But a line is a basic concept on its own: a beam of light, a route on a map, or even--

Argh! No - circles are one example of sine. In a sentence: Sine is a natural sway, the epitome of smoothness: it makes circles "circular" in the same way lines make squares "square".

Let's build our intuition by seeing sine as its own shape, and then understand how it fits into circles and the like. Onward!

Remember to separate an idea from an example: squares are examples of lines. Sine clicked when it became its own idea, not "part of a circle."

Let's observe sine in a simulator (Email readers, you may need to open the article directly):

Hubert will give the tour:

Let's explore the differences with video:

Unfortunately, textbooks don't show sine with animations or dancing. No, they prefer to introduce sine with a timeline (try setting "horizontal" to "timeline"):

Egads. This is the schematic diagram we've always been shown. Does it give you the feeling of sine? Not any more than a skeleton portrays the agility of a cat. Let's watch sine move and then chart its course.

Circles have sine. Yes. But seeing the sine inside a circle is like getting the eggs back out of the omelette. It's all mixed together!

Let's take it slow. In the simulation, set Hubert to vertical:none and horizontal: sine*. See him wiggle sideways? That's the motion of sine. There's a small tweak: normally sine starts the cycle at the neutral midpoint and races to the max. This time, we start at the max and fall towards the midpoint. Sine that "starts at the max" is called cosine, and it's just a version of sine (like a horizontal line is a version of a vertical line).

Ok. Time for both sine waves: put vertical as "sine" and horizontal as "sine*". And... we have a circle!

A horizontal and vertical "spring" combine to give circular motion. Most textbooks draw the circle and try to extract the sine, but I prefer to build up: start with pure horizontal or vertical motion and add in the other.

A few insights I missed when first learning sine:

Sine wiggles in one dimension. Really. We often graph sine over time (so we don't write over ourselves) and sometimes the "thing" doing sine is also moving, but this is optional! A spring in one dimension is a perfectly happy sine wave.

(Source: Wikipedia, try not to get hypnotized.)

Circles are an example of two sine waves

Circles and squares are a combination of basic components (sines and lines). The circle is made from two connected 1-d waves, each moving the horizontal and vertical direction.

But remember, circles aren't the origin of sines any more than squares are the origin of lines. They're examples, not the source.

What do the values of sine mean?

Tricky question. Sine is a cycle and x, the input, is how far along we are in the cycle.

Linear motion has few surprises. Now for sine (focusing on the "0 to max" cycle): 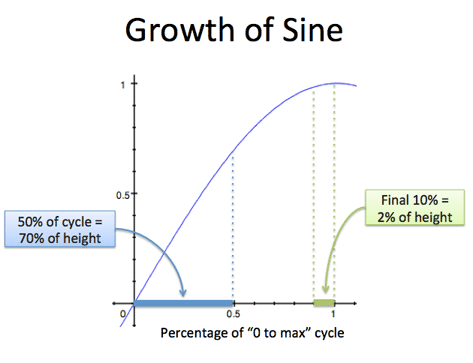 Despite our initial speed, sine slows so we gently kiss the max value before turning around. This smoothness makes sine, sine.

For the geeks: Press "show stats" in the simulation. You'll see the percent complete of the total cycle, mini-cycle (0 to 1.0), and the value attained so far. Stop, step through, and switch between linear and sine motion to see the values.

Quick quiz: What's further along, 10% of a linear cycle, or 10% of a sine cycle? Sine. Remember, it barrels out of the gate at max speed. By the time sine hits 50% of the cycle, it's moving at the average speed of linear cycle, and beyond that, it goes slower (until it reaches the max and turns around).

So x is the 'amount of your cycle'. What's the cycle?

It depends on the context.

Play with values of x here:

But again, cycles depend on circles! Can we escape their tyranny?

Imagine a sightless alien who only notices shades of light and dark. Could you describe pi to it? It's hard to flicker the idea of a circle's circumference, right?

Let's define pi as the time sine takes from 0 to 1 and back to 0. Whoa! Now we're using pi without a circle too! Pi is a concept that just happens to show up in circles:

Aha! That is why pi appears in so many formulas! Pi doesn't "belong" to circles any more than 0 and 1 do -- pi is about sine returning to center! A circle is an example of a shape that repeats and returns to center every 2*pi units. But springs, vibrations, etc. return to center after pi too!

Question: If pi is half of a natural cycle, why isn't it a clean, simple number?

It's philosophically inconvenient when nature doesn't line up with our number system. I don't have a good intuition. My hunch is simple rules (1x1 square + Pythagorean Theorem) can still lead to complex outcomes.

How fast is sine?

So, we use sin(n*x) to get a sine wave cycling as fast as we need. Often, the phrase "sine wave" is referencing the general shape and not a specific speed. 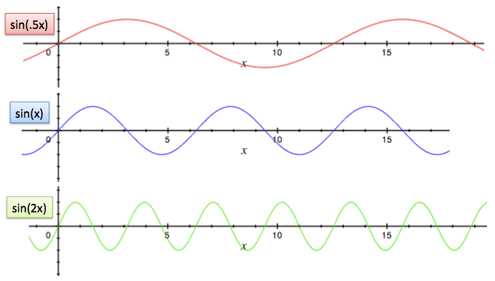 Part 2: Understanding the definitions of sine

That's a brainful -- take a break if you need it. Hopefully, sine is emerging as its own pattern. Now let's develop our intuition by seeing how common definitions of sine connect.

Definition 1: The height of a triangle / circle!

Sine was first found in triangles. You may remember "SOH CAH TOA" as a mnemonic

For a right triangle with angle x, sin(x) is the length of the opposite side divided by the hypotenuse. If we make the hypotenuse 1, we can simplify to:

And with more cleverness, we can draw our triangles with hypotenuse 1 in a circle with radius 1: 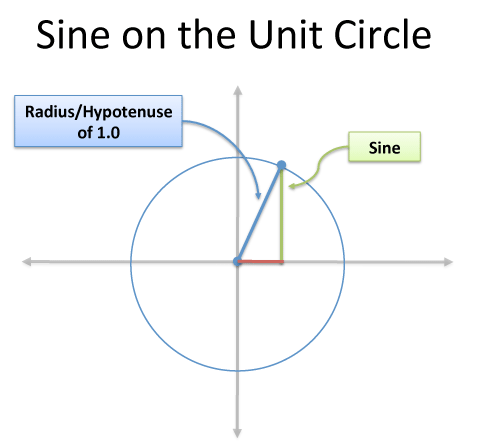 Voila! A circle containing all possible right triangles (since they can be scaled up using similarity). For example:

These direct manipulations are great for construction (the pyramids won't calculate themselves). Unfortunately, after thousands of years we start thinking the meaning of sine is the height of a triangle. No no, it's a shape that shows up in circles (and triangles).

Realistically, for many problems we go into "geometry mode" and start thinking "sine = height" to speed through things. That's fine -- just don't get stuck there.

I've avoided the elephant in the room: how in blazes do we actually calculate sine!? Is my calculator drawing a circle and measuring it?

Glad to rile you up. Here's the circle-less secret of sine:

Sine is acceleration opposite to your current position

Using our bank account metaphor: Imagine a perverse boss who gives you a raise the exact opposite of your current bank account! If you have \$50 in the bank, then your raise next week is \$50. Of course, your income might be \$75/week, so you'll still be earning some money \$75 - \$50 for that week), but eventually your balance will decrease as the "raises" overpower your income.

But never fear! Once your account hits negative (say you're at \$50), then your boss gives a legit \$50/week raise. Again, your income might be negative, but eventually the raises will overpower it.

This constant pull towards the center keeps the cycle going: when you rise up, the "pull" conspires to pull you in again. It also explains why neutral is the max speed for sine: If you are at the max, you begin falling and accumulating more and more "negative raises" as you plummet. As you pass through then neutral point you are feeling all the negative raises possible (once you cross, you'll start getting positive raises and slowing down).

Geeking Out With Calculus

Let's describe sine with calculus. Like e, we can break sine into smaller effects:

How should we think about this? See how each effect above changes our distance from center:

So, after "x" seconds we might guess that sine is "x" (initial impulse) minus x^3/3! (effect of the acceleration): 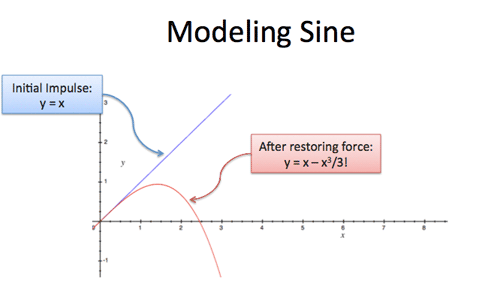 Something's wrong -- sine doesn't nosedive! With e, we saw that "interest earns interest" and sine is similar. The "restoring force" changes our distance by -x^3/3!, which creates another restoring force to consider. Consider a spring: the pull that yanks you down goes too far, which shoots you downward and creates another pull to bring you up (which again goes too far). Springs are crazy!

We need to consider every restoring force: 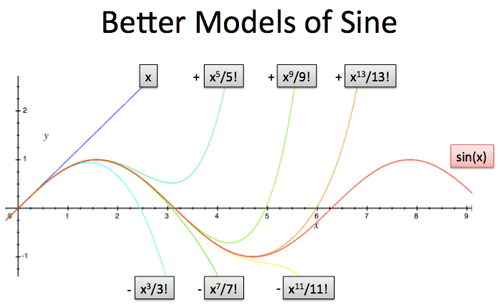 Just like e, sine can be described with an infinite series:

The Calculus of Cosine

Cosine is just a shifted sine, and is fun (yes!) now that we understand sine:

So cosine just starts off... sitting there at 1. We let the restoring force do the work:

Both sine and cosine make this true. I first hated this definition; it's so divorced from a visualization. I didn't realize it described the essence of sine, "acceleration opposite your position".

And remember how sine and e are connected? Well, e^x can be be described by (equation):

The same equation with a positive sign ("acceleration equal to your position")! When sine is "the height of a circle" it's really hard to make the connection to e.

One of my great mathematical regrets is not learning differential equations. But I want to, and I suspect having an intuition for sine and e will be crucial.

The goal is to move sine from some mathematical trivia ("part of a circle") to its own shape:

Using this approach, Alistair MacDonald made a great tutorial with code to build your own sine and cosine functions.