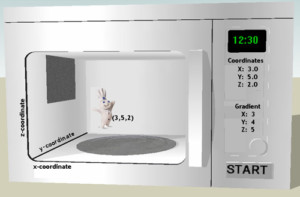 The gradient is a fancy word for derivative, or the rate of change of a function. It’s a vector (a direction to move) that

The term "gradient" is typically used for functions with several inputs and a single output (a scalar field). Yes, you can say a line has a gradient (its slope), but using "gradient" for single-variable functions is unnecessarily confusing. Keep it simple.

“Gradient” can refer to gradual changes of color, but we’ll stick to the math definition if that’s ok with you. You’ll see the meanings are related.

Properties of the Gradient

Now that we know the gradient is the derivative of a multi-variable function, let’s derive some properties.

The regular, plain-old derivative gives us the rate of change of a single variable, usually x. For example, dF/dx tells us how much the function F changes for a change in x. But if a function takes multiple variables, such as x and y, it will have multiple derivatives: the value of the function will change when we “wiggle” x (dF/dx) and when we wiggle y (dF/dy).

We can represent these multiple rates of change in a vector, with one component for each derivative. Thus, a function that takes 3 variables will have a gradient with 3 components:

The gradient of a multi-variable function has a component for each direction.

And just like the regular derivative, the gradient points in the direction of greatest increase (here's why: we trade motion in each direction enough to maximize the payoff).

However, now that we have multiple directions to consider (x, y and z), the direction of greatest increase is no longer simply “forward” or “backward” along the x-axis, like it is with functions of a single variable.

I’m a big fan of examples to help solidify an explanation. Suppose we have a magical oven, with coordinates written on it and a special display screen: 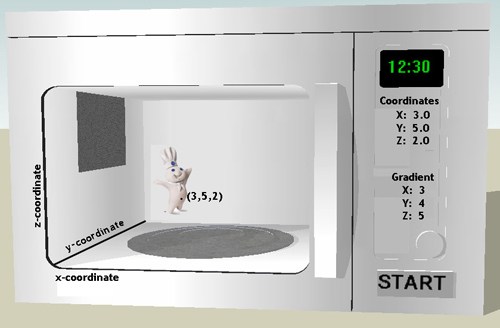 We can type any 3 coordinates (like “3,5,2″) and the display shows us the gradient of the temperature at that point.

The microwave also comes with a convenient clock. Unfortunately, the clock comes at a price — the temperature inside the microwave varies drastically from location to location. But this was well worth it: we really wanted that clock.

With me so far? We type in any coordinate, and the microwave spits out the gradient at that location.

Now suppose we are in need of psychiatric help and put the Pillsbury Dough Boy inside the oven because we think he would taste good. He’s made of cookie dough, right? We place him in a random location inside the oven, and our goal is to cook him as fast as possible. The gradient can help!

Thus, we would start at a random point like (3,5,2) and check the gradient. In this case, the gradient there is (3,4,5). Now, we wouldn’t actually move an entire 3 units to the right, 4 units back, and 5 units up. The gradient is just a direction, so we’d follow this trajectory for a tiny bit, and then check the gradient again.

Eventually, we’d get to the hottest part of the oven and that’s where we’d stay, about to enjoy our fresh cookies.

But before you eat those cookies, let’s make some observations about the gradient. That’s more fun, right?

First, when we reach the hottest point in the oven, what is the gradient there?

But what if there are two nearby maximums, like two mountains next to each other? You could be at the top of one mountain, but have a bigger peak next to you. In order to get to the highest point, you have to go downhill first.

Ah, now we are venturing into the not-so-pretty underbelly of the gradient. Finding the maximum in regular (single variable) functions means we find all the places where the derivative is zero: there is no direction of greatest increase. If you recall, the regular derivative will point to local minimums and maximums, and the absolute max/min must be tested from these candidate locations.

The same principle applies to the gradient, a generalization of the derivative. You must find multiple locations where the gradient is zero — you’ll have to test these points to see which one is the global maximum. Again, the top of each hill has a zero gradient — you need to compare the height at each to see which one is higher. Now that we have cleared that up, go enjoy your cookie.

We know the definition of the gradient: a derivative for each variable of a function. The gradient symbol is usually an upside-down delta, and called “del” (this makes a bit of sense – delta indicates change in one variable, and the gradient is the change in for all variables). Taking our group of 3 derivatives above

Notice how the x-component of the gradient is the partial derivative with respect to x (similar for y and z). For a one variable function, there is no y-component at all, so the gradient reduces to the derivative.

If we want to find the direction to move to increase our function the fastest, we plug in our current coordinates (such as 3,4,5) into the gradient and get:

So, this new vector (1, 8, 75) would be the direction we’d move in to increase the value of our function. In this case, our x-component doesn’t add much to the value of the function: the partial derivative is always 1.

Obvious applications of the gradient are finding the max/min of multivariable functions. Another less obvious but related application is finding the maximum of a constrained function: a function whose x and y values have to lie in a certain domain, i.e. find the maximum of all points constrained to lie along a circle. Solving this calls for my boy Lagrange, but all in due time, all in due time: enjoy the gradient for now.

The key insight is to recognize the gradient as the generalization of the derivative. The gradient points to the direction of greatest increase; keep following the gradient, and you will reach the local maximum.

Why is the gradient perpendicular to lines of equal potential?

Lines of equal potential (“equipotential”) are the points with the same energy (or value for F(x,y,z)). In the simplest case, a circle represents all items the same distance from the center.