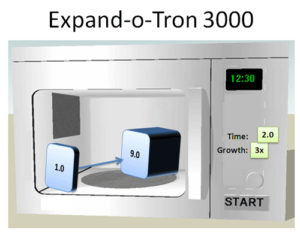 We’re taught that exponents are repeated multiplication. This is a good introduction, but it breaks down on 3^1.5 and the brain-twisting 0^0. How do you repeat zero zero times and get 1?

You can’t, not while exponents are repeated multiplication. Today our mental model is due for an upgrade.

Repeated addition works when multiplying by nice round numbers like 2 and 10, but not when using numbers like -1 and $\sqrt{2}$. Why?

Our model was incomplete. Numbers aren’t just a count; a better viewpoint is a position on a line. This position can be negative (-1), between other numbers ($\sqrt{2}$), or in another dimension (i).

Arithmetic became a way to transform a number: Addition was sliding (+3 means slide 3 units to the right), and multiplication was scaling (times 3 means scale it up 3x).

So what are exponents?

Let me introduce the Expand-o-tron 3000. 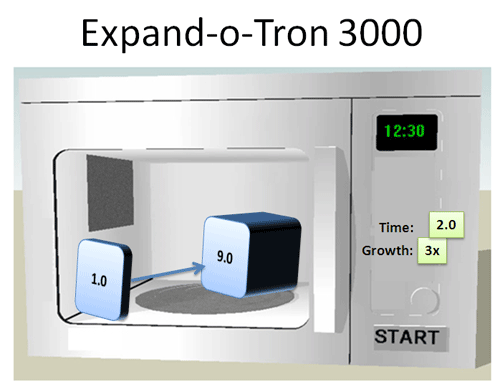 Yes, this device looks like a shoddy microwave — but instead of heating food, it grows numbers. Put a number in and a new one comes out. Here’s how:

And shazam! The bell rings and we pull out our shiny new number. Suppose we want to change 1.0 into 9:

Mathematically, the expand-o-tron (exponent function) does this:

Whenever you see an plain exponent by itself (like 2^3), we’re starting with 1.0.

When multiplying, we can just state the final scaling factor. Want it 8 times larger? Multiply by 8. Done.

Exponents are a bit… finicky:

Expand-o-tron: Ok, stick it in.

You: How big will it get?

You: Find out? I was hoping you’d kn-

The expand-o-tron is indirect. Just looking at it, you’re not sure what it’ll do: What does 3^10 mean to you? How does it make you feel? Instead of a nice tidy scaling factor, exponents want us to feel, relive, even smell the growing process. Whatever you end with is your scaling factor.

It sounds roundabout and annoying. You know why? Most things in nature don’t know where they’ll end up!

Do you think bacteria plans on doubling every 14 hours? No — it just eats the moldy bread you forgot about in the fridge as fast as it can, and as it gets more it starts growing even faster. To predict the behavior, we use how fast they’re growing (current rate) and how long they’ll be changing (time) to figure out their final value.

The answer has to be worked out — exponents are a way of saying “Begin with these conditions, start changing, and see where you end up”. The expand-o-tron (or our calculator) does the work by crunching the numbers to get the final scaling factor. But someone has to do it.

Let’s see if the expand-o-tron can help us understand exponents. First up: what does at 2^1.5 mean?

It’s confusing when we think of repeated multiplication. But the expand-o-tron makes it simple: 1.5 is just the amount of time in the machine.

2^1.5 means 1.5 seconds in the machine, so somewhere between 2x and 4x growth (more later). The idea of “repeated counting” had us stuck using whole numbers, but fractional seconds are completely fine.

What if we want to two growth cycles back-to-back? Let’s say we use the machine for 2 seconds, and then use it for 3 seconds at the exact same power:

Think about your regular microwave — isn’t this the same as one continuous cycle of 5 seconds? It sure is. As long as the power setting (base) stayed the same, we can just add the time:

Again, the expand-o-tron gives us a scaling factor to change our number. To get the total effect from two consecutive uses, we just multiply the scaling factors together.

Not too bad. Now what would growing for half that time look like? It’d be 1.5 seconds:

Now what would happen if we did that twice?

And we get the cube root! For me, this is an intuitive reason why dividing the exponents gives roots: we split the time into equal amounts, so each “partial growth” period must have the same effect. If three identical effects are multiplied together, it means they’re each a cube root.

Now we’re on a roll — what does a negative exponent mean? Negative seconds means going back in time! If going forward grows by a scaling factor, going backwards should shrink by it. 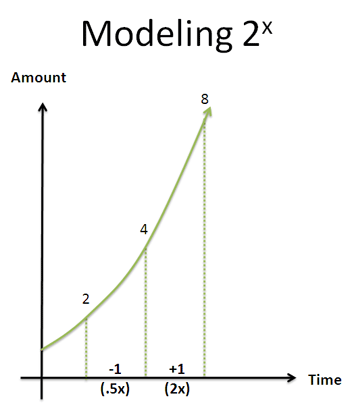 This works for any number! Wherever 1 million is, we were at 500,000 one second before it. Try it below:

Now let’s try the tricky stuff: what does 3^0 mean? Well, we set the machine for 3x growth, and use it for… zero seconds. Zero seconds means we don’t even use the machine!

Taking zero as a base

How do we interpret 0^x? Well, our growth amount is “0x” — after a second, the expand-o-tron obliterates the number and turns it to zero. But if we’ve obliterated the number after 1 second, it really means any amount of time will destroy the number:

No matter the tiny power we raise it to, it will be some root of 0.

Zero to the zeroth power

(For the math geeks: Defining 0^0 as 1 makes many theorems work smoothly. In reality, 0^0 depends on the scenario (continuous or discrete) and is under debate. The microwave analogy isn’t about rigor — it helps me see why it could be 1, in a way that “repeated counting” does not.)

Here's what happens when we try to plug in actual numbers:

Advanced: Repeated Exponents (a to the b to the c)

Repeated exponents are tricky. What does

mean? It’s “repeated multiplication, repeated” — another way of saying “do that exponent thing once, and do it again”. Let’s dissect it:

This is where the repeated counting interpretation helps get our bearings. But then we bring out the expand-o-tron: we grow for 3 seconds in Phase I, and redo that for 4 more seconds. It works for fractional powers — for example,

It’s different, so try some examples:

Advanced: Rewriting Exponents For The Grower

The expand-o-tron is a bit strange: numbers start growing the instant they’re inside, but we specify the desired growth at the end of each second.

We say we want 2x growth at the end of the first second. But how do we know what rate to start off with? How fast should we be growing at 0.5 seconds? It can’t be the full amount, or else we’ll overshoot our goal as our interest compounds.

Here’s the key: Growth curves written like 2^x are from the observer’s viewpoint, not the grower.

The value “2″ is measured at the end of the interval and we work backwards to create the exponent. This is convenient for us, but not the growing quantity — bacteria, radioactive elements and money don’t care about lining up with our ending intervals!

No, these critters know their current, instantaneous growth rate, and don’t try to line it up with our boundaries. It’s just like understanding radians vs. degrees — radians are “natural” because they are measured from the mover’s viewpoint.

To get into the grower’s viewpoint, we use the magical number e. There’s much more to say, but we can convert any “observer-focused” formula like 2^x into a “grower-focused” one:

We’ll save these details for another day — just remember the difference between the grower’s instantaneous growth rate (which the bacteria controls) and the observer’s chart that’s measured at the end of each interval. Underneath it all, every exponential curve is a scaled version of e^x:

Every exponent is a variation of e, just like every number is a scaled version of 1.

Why use this analogy?

Does the expand-o-tron exist? Do numbers really gather up in a line? Nope — they’re ways of looking at the world.

The expand-o-tron removes the mental hiccups when seeing 2^1.5 or even 0^0: it’s just 0x growth for 0 seconds, which doesn’t change the number. Everything from slide rules to Euler’s formula begins to click once we recognize the core theme of growth — even beasts like i^i can be tamed.