A Visual Guide to Version Control

Version Control (aka Revision Control aka Source Control) lets you track your files over time. Why do you care? So when you mess up you can easily get back to a previous working version.

You’ve probably cooked up your own version control system without realizing it had such a geeky name. Got any files like this? (Not these exact ones I hope).

It’s why we use “Save As”. You want the new file without obliterating the old one. It’s a common problem, and solutions are usually like this:

So Why Do We Need A Version Control System (VCS)?

Our shared folder/naming system is fine for class projects or one-time papers. But software projects? Not a chance.

Do you think the Windows source code sits in a shared folder like “Windows2007-Latest-UPDATED!!”, for anyone to edit? That every programmer just works in a different subfolder? No way.

Large, fast-changing projects with many authors need a Version Control System (geekspeak for “file database”) to track changes and avoid general chaos. A good VCS does the following:

Shared folders are quick and simple, but can’t beat these features.

Most version control systems involve the following concepts, though the labels may be different.

Alice adds a file (list.txt) to the repository. She checks it out, makes a change (puts “milk” on the list), and checks it back in with a checkin message (“Added required item.”). The next morning, Bob updates his local working set and sees the latest revision of list.txt, which contains “milk”. He can browse the changelog or diff to see that Alice put “milk” the day before.

This guide is purposefully high-level: most tutorials throw a bunch of text commands at you. Let’s cover the high-level concepts without getting stuck in the syntax (the Subversion manual is always there, don’t worry). Sometimes it’s nice to see what’s possible.

The simplest scenario is checking in a file (list.txt) and modifying it over time.

The -m flag is the message to use for this checkin.

In reality, you might not keep checking in a file. You may have to check out, edit and check in. The cycle looks like this: 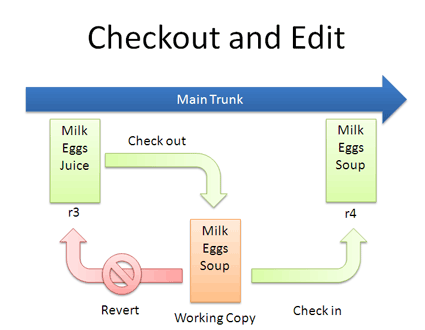 If you don’t like your changes and want to start over, you can revert to the previous version and start again (or stop). When checking out, you get the latest revision by default. If you want, you can specify a particular revision. In Subversion, run:

The trunk has a history of changes as a file evolves. Diffs are the changes you made while editing: imagine you can “peel” them off and apply them to a file:

For example, to go from r1 to r2, we add eggs (+Eggs). Imagine peeling off that red sticker and placing it on r1, to get r2.

Most version control systems store diffs rather than full copies of the file. This saves disk space: 4 revisions of a file doesn’t mean we have 4 copies; we have 1 copy and 4 small diffs. Pretty nifty, eh? In SVN, we diff two revisions of a file like this:

Diffs help us notice changes (“How did you fix that bug again?”) and even apply them from one branch to another.

Bonus question: what’s the diff from r1 to r4?

Notice how “Juice” wasn’t even involved — the direct jump from r1 to r4 doesn’t need that change, since Juice was overridden by Soup.

Branches let us copy code into a separate folder so we can monkey with it separately:

For example, we can create a branch for new, experimental ideas for our list: crazy things like Rice or Eggo waffles. Depending on the version control system, creating a branch (copy) may change the revision number.

Now that we have a branch, we can change our code and work out the kinks. (“Hrm… waffles? I don’t know what the boss will think. Rice is a safe bet.”). Since we’re in a separate branch, we can make changes and test in isolation, knowing our changes won’t hurt anyone. And our branch history is under version control.

In Subversion, you create a branch simply by copying a directory to another.

So branching isn’t too tough of a concept: Pretend you copied your code into a different directory. You’ve probably branched your code in school projects, making sure you have a “fail safe” version you can return to if things blow up.

Branching sounds simple, right? Well, it’s not — figuring out how to merge changes from one branch to another can be tricky.

Let’s say we want to get the “Rice” feature from our experimental branch into the mainline. How would we do this? Diff r6 and r7 and apply that to the main line?

Wrongo. We only want to apply the changes that happened in the branch!. That means we diff r5 and r6, and apply that to the main trunk: 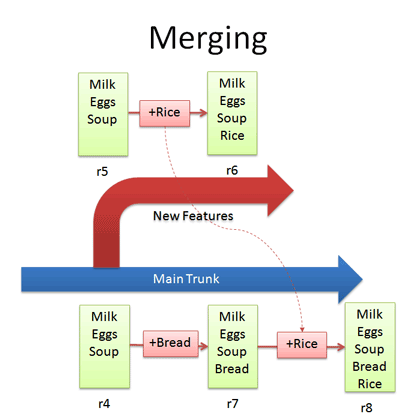 If we diffed r6 and r7, we would lose the “Bread” feature that was in main. This is a subtle point — imagine “peeling off” the changes from the experimental branch (+Rice) and adding that to main. Main may have had other changes, which is ok — we just want to insert the Rice feature.

In Subversion, merging is very close to diffing. Inside the main trunk, run the command:

This command diffs r5-r6 in the experimental branch and applies it to the current location. Unfortunately, Subversion doesn’t have an easy way to keep track of what merges have been applied, so if you’re not careful you may apply the same changes twice. It’s a planned feature, but the current advice is to keep a changelog message reminding you that you’ve already merged r5-r6 into main.

Many times, the VCS can automatically merge changes to different parts of a file. Conflicts can arise when changes appear that don’t gel: Joe wants to remove eggs and replace it with cheese (-eggs, +cheese), and Sue wants to replace eggs with a hot dog (-eggs, +hot dog).

At this point it’s a race: if Joe checks in first, that’s the change that goes through (and Sue can’t make her change).

When changes overlap and contradict like this, the VCS may report a conflict and not let you check in — it’s up to you to check in a newer version that resolves this dilemma. A few approaches:

Conflicts are infrequent but can be a pain. Usually I update to the latest and re-apply my changes.

Who would have thought a version control system would be Web 2.0 compliant? Many systems let you tag (label) any revision for easy reference. This way you can refer to “Release 1.0” instead of a particular build number: 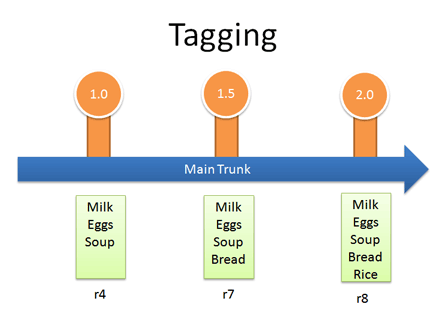 In Subversion, tags are just branches that you agree not to edit; they are around for posterity, so you can see exactly what your version 1.0 release contained. Hence they end in a stub — there’s nowhere to go.

We guessed that Windows was managed out of a shared folder, but it’s not the case. So how’s it done?

You develop new features in your branch and “Reverse Integrate (RI)” to get them into Main. Later, you “Forward Integrate” to bring the latest changes from Main into your branch: 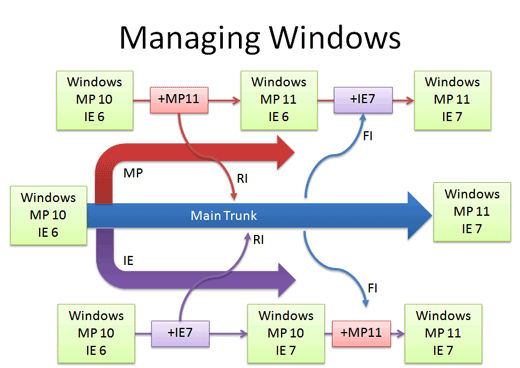 Let’s say we’re at Media Player 10 and IE 6. The Media Player team makes version 11 in their own branch. When it’s ready and tested, there’s a patch from 10 – 11 which is applied to Main (just like the “Rice” example, but a tad more complicated). This is a reverse integration, from the branch to the trunk. The IE team can do the same thing.

Later, the Media Player team can pick up the latest code from other teams, like IE. In this case, Media Player forward integrates and gets the latest patches from main into their branch. This is like pulling in the “Bread” feature into the experimental branch, but again, more complicated.

So it’s RI and FI. Aye aye. This arrangement lets changes percolate throughout the branches, while keeping new code out of the main line. Cool, eh?

In reality, there’s many layers of branches and sub-branches, along with quality metrics that determine when you get to RI. But you get the idea: branches help manage complexity. Now you know the basics of how one of the largest software projects is organized.

My goal was to share high-level thoughts about version control systems. Here are the basics:

These are the basics — as time goes on I’ll share specific lessons I’ve learned from my projects. Now that you’ve figured out a regular VCS, try an illustrated guide to distributed version control.

Like these diagrams? Buy the original slides for only \$5