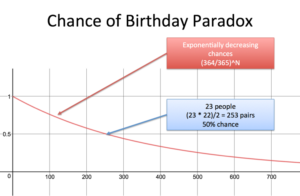 Put down the calculator and pitchfork, I don’t speak heresy. The birthday paradox is strange, counter-intuitive, and completely true. It’s only a “paradox” because our brains can’t handle the compounding power of exponents. We expect probabilities to be linear and only consider the scenarios we’re involved in (both faulty assumptions, by the way).

Let’s see why the paradox happens and how it works.

We’ve taught ourselves mathematics and statistics, but let’s not kid ourselves: it’s not natural.

Here’s an example: What’s the chance of getting 10 heads in a row when flipping coins? The untrained brain might think like this:

And there we sit, smug as a bug on a rug. No dice bub. 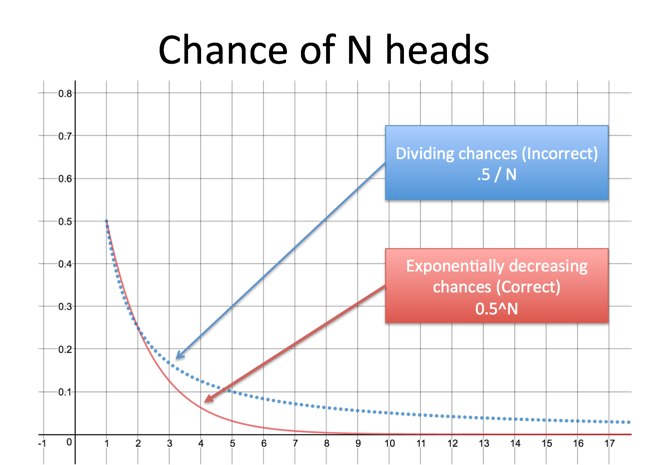 But even after training, we get caught again. At 5% interest we’ll double our money in 14 years, rather than the “expected” 20. Did you naturally infer the Rule of 72 when learning about interest rates? Probably not. Understanding compound exponential growth with our linear brains is hard.

Take a look at the news. Notice how much of the negative news is the result of acting without considering others. I’m an optimist and do have hope for mankind, but that’s a separate discussion :).

In a room of 23, do you think of the 22 comparisons where your birthday is being compared against someone else’s? Probably.

Do you think of the 231 comparisons where someone who is not you is being checked against someone else who is not you? Do you realize there are so many? Probably not.

The fact that we neglect the 10 times as many comparisons that don’t include us helps us see why the “paradox” can happen.

Ok, fine, humans are awful: Show me the math!

The question: What are the chances that two people share a birthday in a group of 23?

Sure, we could list the pairs and count all the ways they could match. But that’s hard: there could be 1, 2, 3 or even 23 matches!

It’s like asking “What’s the chance of getting one or more heads in 23 coin flips?” There are so many possibilities: heads on the first throw, or the 3rd, or the last, or the 1st and 3rd, the 2nd and 21st, and so on.

How do we solve the coin problem? Flip it around (Get it? Get it?). Rather than counting every way to get heads, find the chance of getting all tails, our “problem scenario”.

The same principle applies for birthdays. Instead of finding all the ways we match, find the chance that everyone is different, the “problem scenario”. We then take the opposite probability and get the chance of a match. It may be 1 match, or 2, or 20, but somebody matched, which is what we need to find.

(Brush up on combinations and permutations if you like).

The chance of 2 people having different birthdays is:

Makes sense, right? When comparing one person's birthday to another, in 364 out of 365 scenarios they won't match. Fine.

But making 253 comparisons and having them all be different is like getting heads 253 times in a row -- you had to dodge "tails" each time. (For now, let's pretend birthday comparisons are like coin flips -- see Appendix A for the exact calculation.)

We use exponents to find the probability:

Our chance of getting a single miss is pretty high (99.7260%), but when you take that chance hundreds of times, the odds of keeping up that streak drop. Fast. 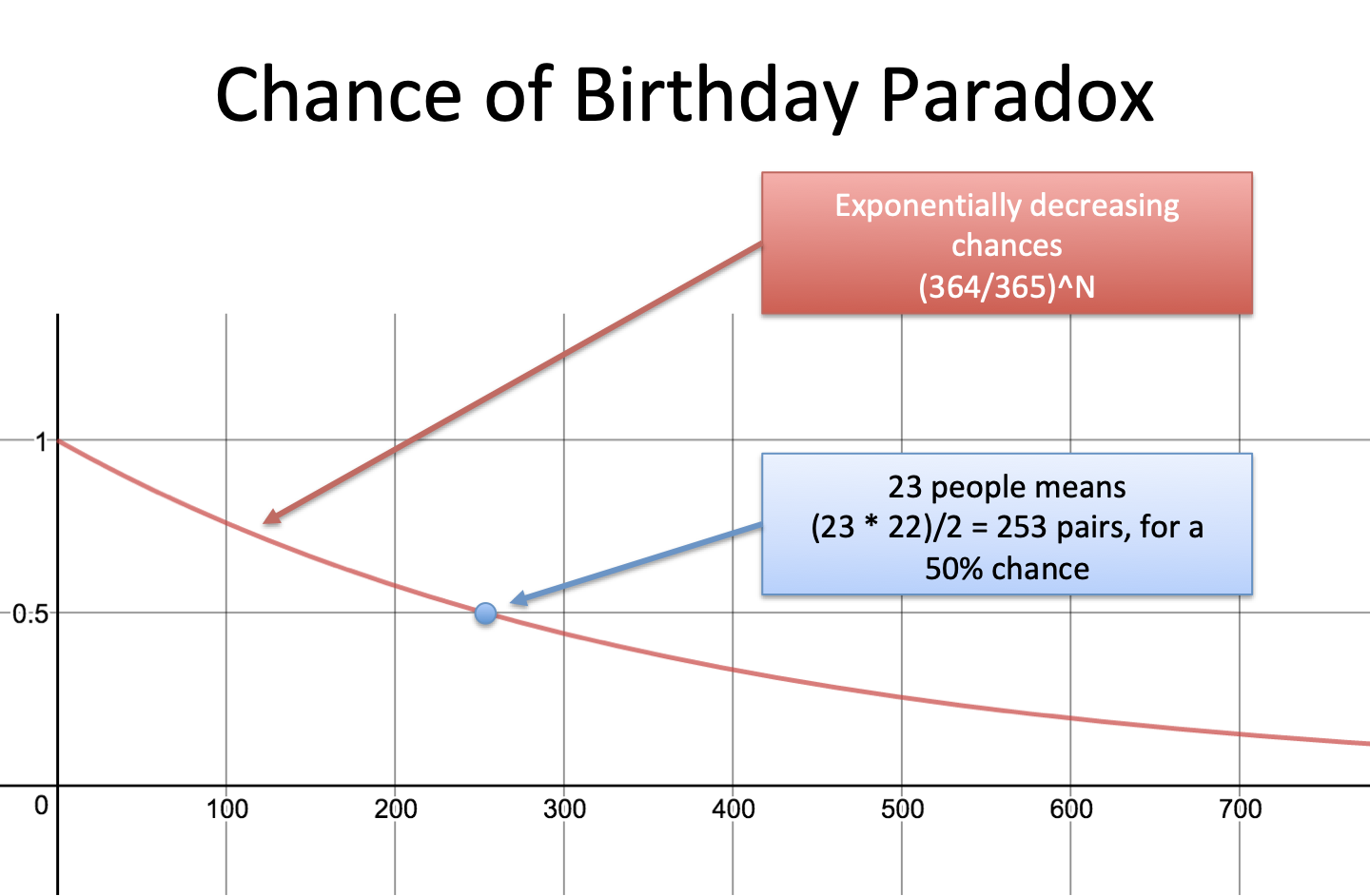 I didn’t believe we needed only 23 people. The math works out, but is it real?

You bet. Try the example below: Pick a number of items (365), a number of people (23) and run a few trials. You’ll see the theoretical match and your actual match as you run your trials. Go ahead, click the button (or see the full page).

As you run more and more trials (keep clicking!) the actual probability should approach the theoretical one.

Here are a few lessons from the birthday paradox:

After thinking about it a lot, the birthday paradox finally clicks with me. But I still check out the interactive example just to make sure.

Remember how we assumed birthdays are independent? Well, they aren’t.

If Person A and Person B match, and Person B and C match, we know that A and C must match also. The outcome of matching A and C depends on their results with B, so the probabilities aren’t independent. (If truly independent, A and C would have a 1/365 chance of matching, but we know it's a 100% guaranteed match.)

When counting pairs, we treated birthday matches like coin flips, multiplying the same probability over and over. This assumption isn’t strictly true but it’s good enough for a small number of people (23) compared to the sample size (365). It’s unlikely to have multiple people match and screw up the independence, so it’s a good approximation.

It’s unlikely, but it can happen. Let’s figure out the real chances of each person picking a different number:

But there’s a shortcut we can take. When x is close to 0, a coarse first-order Taylor approximation for $e^x$ is:

Using our handy shortcut we can rewrite the big equation to:

Phew. This approximation is very close, plug in your own numbers below:

Good enough for government work, as they say. If you simplify the formula a bit and swap in n for 23 you get:

Appendix B: The General Birthday Formula

Let’s generalize the formula to picking n people from T total items (instead of 365):

If we choose a probability (like 50% chance of a match) and solve for n:

Voila! If you take $\sqrt{T}$ items (17% more if you want to be picky) then you have about a 50-50 chance of getting a match. If you plug in other numbers you can solve for other probabilities:

Remember that m is the desired chance of a match (it’s easy to get confused, I did it myself). If you want a 90% chance of matching birthdays, plug m=90% and T=365 into the equation and see that you need 41 people.

Wikipedia has even more details to satisfy your inner nerd. Go forth and enjoy.